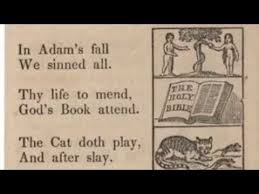 The opening rhyme of the New England Primer‘s alphabet might well be considered objectionable today. Not only was memorization expected of students, but the rhyme refers to sin and guilt, almost unmentionable concepts in our day. Although the focus of Romans 5:12-21 is very positive (Paul talks about super-abounding grace), there is also some grim news about sin. One man (Paul is referring to Adam) sinned, and in him all of us sinned.

Even in C. S. Lewis’ Narnia series, the connection between Adam and his descendants is emphasized:

“’You come of the Lord Adam and the Lady Eve’ said Aslan. ‘And that is both honour enough to erect the head of the poorest beggar, and shame enough to bow the shoulders of the greatest emperor in earth. Be content.’” (C. S. Lewis, Prince Caspian, pp. 211-212).

Lewis reflects important Biblical points. Adam and Eve were created in the image of God, an image in which we share. That elevates the poorest beggar to a position of dignity and honor. But the sin of our first parents affects all of us as well, to our shame. END_OF_DOCUMENT_TOKEN_TO_BE_REPLACED