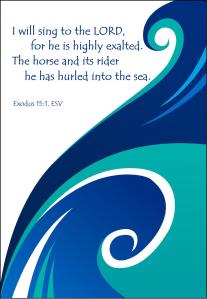 “Their song is ‘the song of Moses, the bond-servant of the God, and the song of the Lamb’ (Rev. 15:3). It is Moses’ song because God’s victory in liberating his people and destroying their enemies stands in continuity with the ancient exodus, which Moses and the Israelites celebrated in song as they watched the Red Sea close over Pharaoh’s pursuing forces (Exod. 15:1–18). But it is also the Lamb’s song, a ‘new song’ (Rev. 14:3) for the triumph of the Lamb in his sacrificial death, resurrection life, and coming judgment is the last and great exodus, the ultimate salvation that was foreshadowed when the Israelites left Egypt in Moses’ day.” (Dennis E. Johnson, Triumph of the Lamb, p. 216).

“The concluding statement of ch. 15 underscores the fact that the bowl afflictions do not come ultimately from the seven angels or from the four living beings, but only from God. All these others are his agents in carrying out his judicial designs. . . . God’s presence is so awesome in expressing wrath that not even heavenly beings can stand in his midst.” ( G. K. Beale, The Book of Revelation, pp. 806–7).

“The battle that issues in the dragon’s expulsion from heaven is not the primeval conflict before Adam’s fall, when Satan and other angels who had been created good inexplicably turned against their Creator. Rather, the war in heaven that John sees in symbol was fought on earth, when Jesus suffered and died on a cross outside Jerusalem and then rose from the dead. The dragon’s banishment from heaven to earth marks the coming of God’s kingdom and of his Christ’s authority (Rev. 12:10).” (Dennis E. Johnson, The Triumph of the Lamb, p. 184).

In preparing for Sunday’s sermon on Revelation 12:10-12 I ran across the quote above, and also this one:

“Christians can be assured that the serpent begins to battle against their bodies only after he has lost the battle over their souls. This expresses one of the major themes of the book: the suffering of Christians is a sign, not of Satan’s victory, but of the saints’ victory over Satan because of their belief in the triumph of the cross, with which their suffering identifies them.” (G. K. Beale, The Book of Revelation, NIGTC, p. 663).

Beware of taking literally John’s obviously symbolic language–but the symbols are powerful. I recently wrote something about the earlier part of this chapter here.