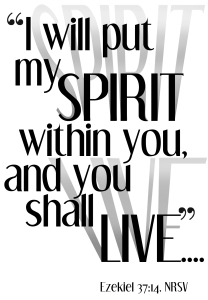 “In the one context in which he reflects on the psychology involved in this reception, Paul indicates that it takes place ‘by believing what you heard’ by contrast with ‘observing the law’ (Gal. 3:2, 5). The Spirit is received in the context of coming to faith in Christ the Lord.” (Sinclair B. Ferguson, The Holy Spirit, p. 92).

“[T]he French-born second generation Reformer of Geneva in Switzerland, John Calvin, has been described, as we have noted, as ‘the theologian of the Holy Spirit.’ Of course the new understanding of the nature of justification (imputed, not infused, alien, not self-attained, righteousness) was a central feature of the new teaching. But this was accompanied by a desacramentalizing of the application of redemption, and a corresponding restoration of the role of the Spirit. Not that the sacraments were denuded of their power, so much as subordinated to the joint action of the word and the Spirit. . . . [I]n the Reformation teaching it was emphasized that the Holy Spirit brought the individual directly into fellowship fellowship with Christ, of which fellowship the sacraments were seen as signs and seals. . . . This is in fact a more ancient question than medieval discussions of it, and surfaces already in Scripture, for example, in the controversies over the relationship between grace and law. Paul explicitly indicates that this soteriological issue is also a penumatological one when he writes: ‘Did you receive the Spirit by observing the law, or by believing what you heard?’ (Gal. 3:2).” (Ferguson, pp. 96–97).

From the Reflection for Trinity Presbyterian Church of the OPC