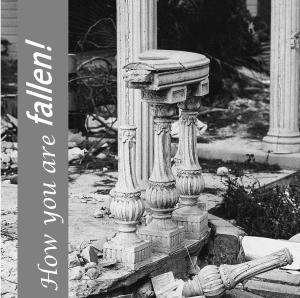 “Pride, however, is not found among Israel alone. It made to Isaiah no difference whether the boasters were the petty grandees of Ju­daea, or the mighty mon­archs of the East…. Its high­est embodiment this sin of pride had found, to the far-reaching vision of Isaiah, in that King of Babel, who said in his heart: ‘I will exalt my throne above the stars of God, I will sit upon the mount of congregation (the mythical mountain, where the gods assembled), in the uttermost parts of the north; I will ascend above the heights of the clouds; I will be like the Most High.’ (14:13,14). Pride is in its essence a form of self-deifi­cation. Satanic sin, a type of Satan, has been found in the King of Babel thus de­scribed….” (Geerhardus Vos, Biblical Theology, p. 302).

“To ride upon the clouds [Isaiah 14:14] is God’s pre­rogative, and the king thus shows that he wishes to be equal with and rival God. In­tentions such as this are the prelude to downfall. ‘Ye shall be like God,’ serpent had said in the garden. Whenev­er men have designed to raise themselves to an equality with God, a descent follows.” (E. J. Young, The Book of Isaiah, Vol. 1, pp. 442–443).