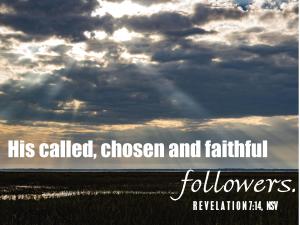 Perhaps you say, “Nothing surprises me anymore.” That may be true, but don’t lose the ability to be astonished with John, to be taken aback, not just at the the horrible wickedness of rebellion, but also at the awful punishment which it brings. Stand firm in the face of both temptation to engage in sin and in the pressure to conform to a rebellious world. Live as what you are: a follower of the Lamb!

“Our modern cities, with their wealth, false religions, and sexual exploitation, are modern forms of Babylon. . . . Little babylons also operate in the recesses of our heart. . . .The Beast controls his subjects through fear; the Prostitute seduces people by playing on their lusts with the enticements of illicit pleasures. However subtle the remaining sinful tendencies in the Christian’s heart may be, they also involve fear and lust.” (Vern S. Poythress, The Returning King, p. 161).

“Since the woman in ch. 12 and the bride in chs. 19 and 21 represent the church throughout the ages, so the harlot counterpart represents satanically infused economic-religious institutions throughout history.” (G. K. Beale, The Book of Revelation, p. 859).

“At its root every pagan world empire is another incarnation of the same satanic spirit that will reach full intensity just before it shatters before the glory of the Lamb and ‘goes to destruction’ (17:8, 11). The final conspiracy is also symbolized in the ten kings (ten horns) who receive authority with the beast ‘for one hour,’ for the sole purpose of putting that authority at the beast’s disposal as it launches its last desperate assault on the Lamb and his ‘called and chosen and faithful followers’ (17:12–14). . . . Jesus’ followers must be prepared for a period of unparalleled, intense persecution at the end, when evil forces now restrained will be released to work their worst against the church. Yet that time of trauma will be brief, and our enemies final conspiracy will end not in the downfall of the church, as they expect, but in their destruction.” (Dennis E. Johnson, Triumph of the Lamb, pp. 251–252).

Quotes used in the Reflection for Trinity Presbyterian Church of the OPC.